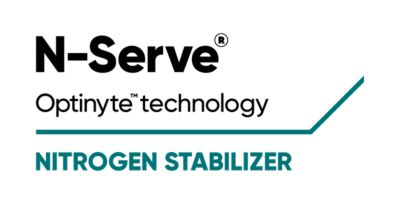 N-Serve® nitrogen stabilizer is proven to protect producers’ largest input investment, ensuring nitrogen is available when and where corn and wheat need it most — in the root zone. When applied with anhydrous ammonia, N-Serve inhibits nitrification, which helps optimize yield and profit potential of corn and wheat.

To find supplemental information on this product in a registered state, please use our Label Finder tool.

Put the max in and keep it there.

N-Serve® nitrogen stabilizer delivers maximum profit by extending nitrogen availability during corn’s key growth stages. It works underground, where up to 70 percent of nitrogen loss can occur through leaching into the ground or denitrification into the atmosphere.

Get the max from anhydrous ammonia.

Any source of nitrogen is susceptible to loss through leaching or denitrification. N-Serve maximizes nitrogen when used with anhydrous ammonia.

Nitrogen when corn needs it.

Corn uses nitrogen in two forms: ammonium (NH4+) and nitrate (NO3-). But it prefers ammonium — because that form is more efficient for plants to use and less susceptible to loss.

But nitrate nitrogen can’t help corn if it’s beyond the reach of the plants’ roots during critical growth times. N-Serve acts to slow down the bacteria that converts ammonium to nitrate, keeping nitrogen in the ammonium form longer. That means it’s there when corn is ready for it — so the crop can reach its maximum yield potential.

Hear how the Richardson’s farm is maximizing its nitrogen and complying with local restrictions in the Chesapeake Bay with Instinct® and N-Serve® nitrogen stabilizers.

Save Up to 10% on Crop Protection

With the TruChoice® Offer, you can save at the time of purchase on 100+ leading crop protection products like this one. Fund a prepay account with Corteva Agriscience to start saving.

®™Trademarks of Dow AgroSciences, DuPont or Pioneer and their affiliated companies or respective owners.Instinct HL and Instinct II are not registered for sale or use in all states. Contact your state pesticide regulatory agency to determine if a product is registered for sale or use in your state. Do not fall-apply anhydrous ammonia south of Highway 16 in the state of Illinois. Always read and follow label directions.